Are you having problems when you try to pair your Apple Watch with your iPhone?

Several users have said that they could not pair their iPhone devices with an Apple Watch. Users may see the following error message:

“iPhone Out of Date. Your iPhone is out of date. Before you can pair it with your Apple Watch, you’ll have to update it to the latest version of iOS.” 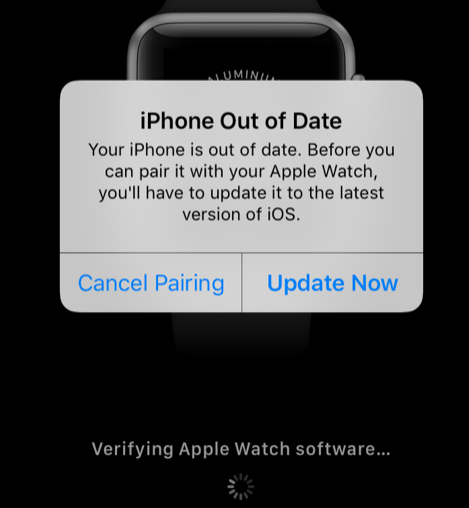 This is an important problem. Unless you fix it, you will not be able to use your Apple Watch. Here is how you can troubleshoot this problem:

iPhone out of date – Apple Watch

As the message state, update your iPhone. Here is how:

If this does not solve your problem, and when you try to update your iPhone, your iPhone says “your software is up to date”, there are few things you should try and know. If this is the case, here is what you can do and what you should know:

So do you have an iPhone 6s and later and still see this message? Here is what you can do:

See also: How To Reset Apple Watch Password When You Forgot

See also: Apple Watch Not Getting Notifications From iPhone, Fix

This article explains how you can view all running applications in macOS. There are a few different…

This article explains how to fix when iTunes keeps crashing on Mac. Several users have further…

Most people write the Wi-Fi password down somewhere. Sometimes, you may need to view your Wi-Fi…

In this article, we explain how you can secretly record a zoom meeting on your Mac….

You can use your Apple Watch to unlock your Mac. This feature is also called Auto…

When you attempt to open a document or a file in the Finder, you may experience…