You are here: Home / How to / How To Watch Disney Plus On Your Apple TV

This article explains how you can get Disney Plus on your Apple TV.

Currently, not all Apple TV models support Disney+. Disney Plus can be watched on Apple TV HD (4th gen or later) and Apple TV 4K running tvOS 11.0 and later. If you have an older Apple TV models (Apple TV 1st, 2nd, and 3rd generation), you cannot get the Disney+ app but there is a workaround. 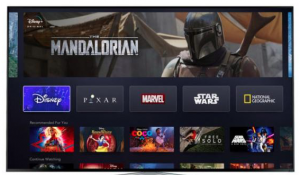 Disney Plus is the on-demand, ad-free online video streaming service which as a lot of movies and shows available to stream from Disney, Pixar, Marvel, Star Wars, National Geographic, and 20th Century Fox.

See also: How Do You Turn Apple TV Auto-Play Off

How to get Disney Plus on supported Apple TV models:

How to get Disney Plus on older Apple TV models

If your Apple TV is 1st, 2nd or 3rd generation, then you can do the following to watch the Disney Plus shows and movies on your Apple TV. These Apple TV models are introduced in 2007, 2010 and 2012.

Please note that there is no way to download the Disney Plus app on these Apple TV models. What you can do, however, is to AirPlay between your iOS or iPadOS device and your Apple TV. Here is how:

See this article if AirPlay is not working.

You may see a message saying ‘This content can’t be played on this Apple TV’.

Apple TV’s  that are compatible with Disney+

Disney+ is supported on:

Disney+ is not supported on:

As you can see from the photos above, these Apple TVs look alike. For example, all of them are black except for the first-generation Apple TVs. If you are not sure about your Apple TV, you can easily identify your model. Here is how:

If you are experiencing problems with Disney Plus, make sure that Apple TV is running the latest software. Here is how you can update your Apple TV: