Some users have reported a problem where they are unable to use their iPhones keypad (also called dial pad) to punch in numbers while they are on a phone call. This can be a serious problem when trying to make a call that requires entering information and selecting menu options. This issue seems to affect users’ ability to enter numbers for phone prompts for many different phone numbers, and so appears to be a general problem for the affected users. This issue has affected people using different cell services.

See also: iPhone or iPad not Showing up in Finder on Mac, Fix

Problems like this have been seen before. There are posts in Apple’s discussions dating back to 2014 from an iPhone 5 user running iOS 8.

See also: iPhone 11 Screen not Responding to Touch? Get it Replaced for Free

We first explain about the two keypads you can find on your iPhone, then give some general tips to try and resolve the problem, and finally list a few alternative options that have worked for some users.

See also: How to Fix Face ID not Working on iPhone

As a few users who have experienced this problem have realized, there are two iPhone keypads. While you are in an active call, there is an option to select the keypad from the call screen.

Which opens up a keypad with a black background. This is the keypad that is actually “active” and the one you need to use while on a phone call.

The other keypad is the one you would see when using the phone’s keypad to make a call. It has a white background.

You access this keypad by tapping on the phone icon from your Home Screen. You can see that even though there is an active call – the time of day is in green in the upper-left corner of the screen – this keypad doesn’t have a red phone image but a green one. Numbers typed into this keypad during a phone call will not be transmitted as DTMF tones, in other words, your menu choices won’t be transmitted.

See also: iPhone Silencing your Calls? How to Fix iPhone not Ringing Problem

Update to the Latest iOS

Keeping your iPhone updated is important. Often people will find that an update has fixed an issue they are having. Go to Settings > General > Software Update. Install any available updates.

Other Things to Try

These suggestions are things that some users who have experienced this problem have said worked for them.

Go to Settings > General > VPN to find your VPN settings.

Some users have said that pressing mute allows them to make the number selection. Press mute again after making the selection. Other users have said that they can’t use the keypad while using the speaker for audio and that they were able to use the keypad if they turned off the speaker – so that the audio came through iPhone’s normal phone speaker.

A user who said he had this issue on multiple previous iPhones as well claimed that reinstalling all apps and data from scratch worked to resolve the issue. It may be a pain to reinstall all your apps and re-enter all your settings. If you would like to try this:

See Restore your iPhone, iPad, or iPod to factory settings for more on restoring your iPhone.

If your problem hasn’t been solved by following any of the above steps, you may contact Apple Support for more assistance.

Several users have reported that they are unable to set up Apple Pay. Users have further…

Several users have said that the Dynamic Desktop feature is not working as expected. Basically, Dynamic… 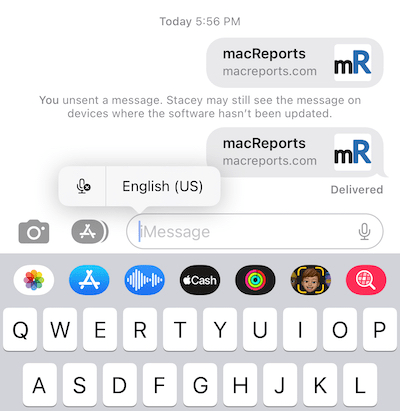